Surprised to receive these as the flag was aiming towards South America!

Posted by G1VVP / Skegness DX, with John Faulkner at 23:15 No comments:

We didn't have a single flake of snow over winter, but we've been having snow showers for the last few days in Skegness. The shower we just had was fairly heavy for a time. We also reached a whopping 12C today too! If you think that's cold, it's been 6C in recent days. Perhaps we'll skip spring (and summer no doubt) this year and head straight to autumn. 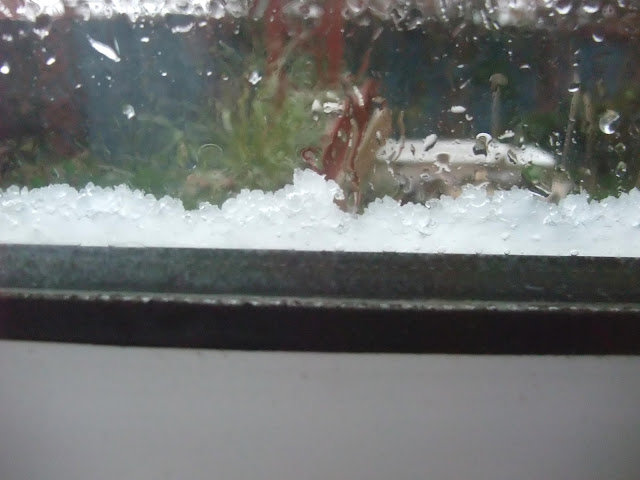 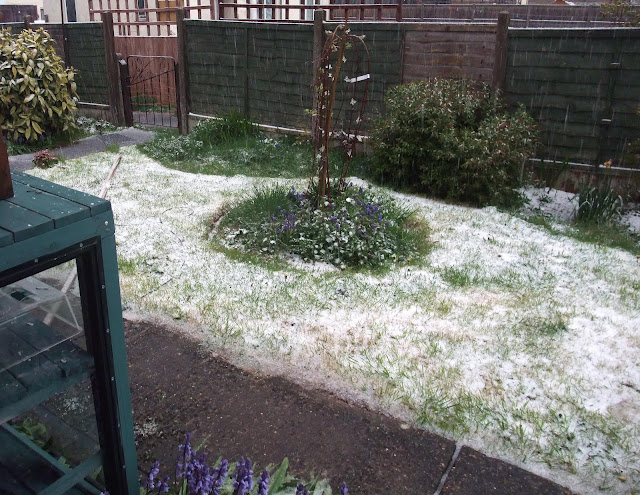 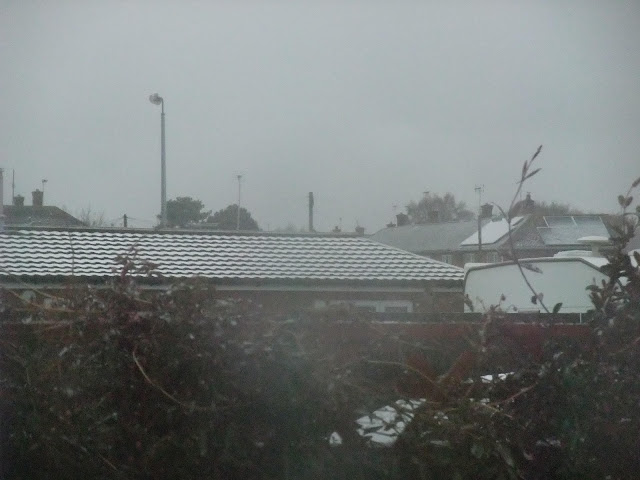 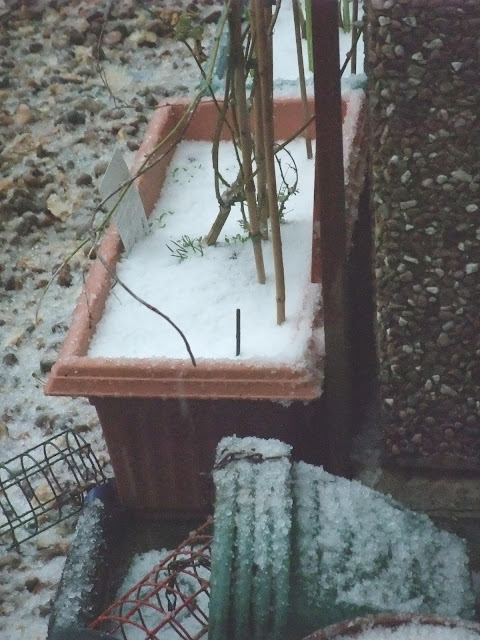 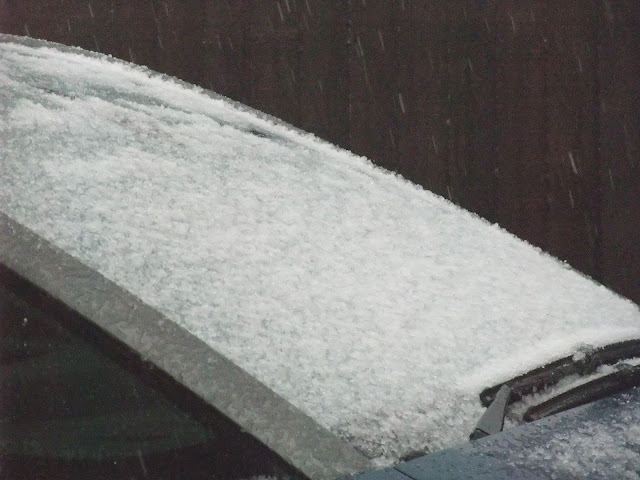 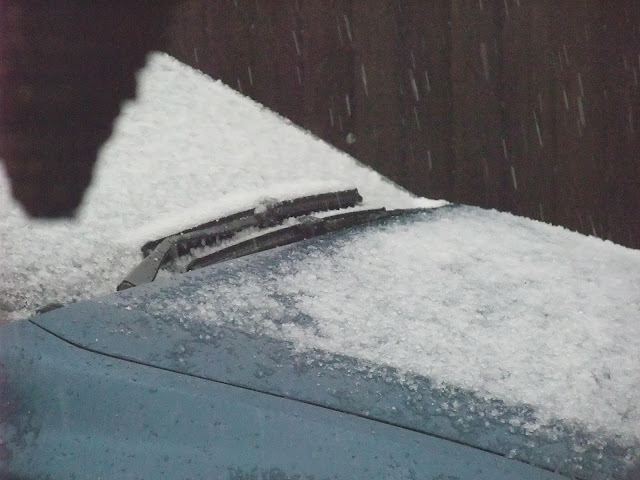 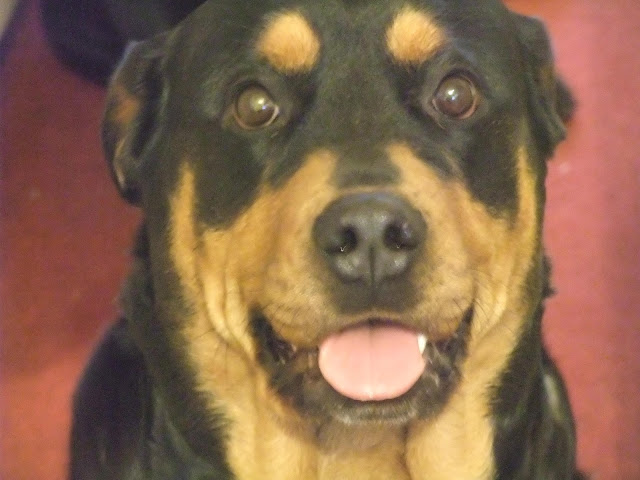 Crystal, one of our fearless Rottweilers, was terrified of the snow! 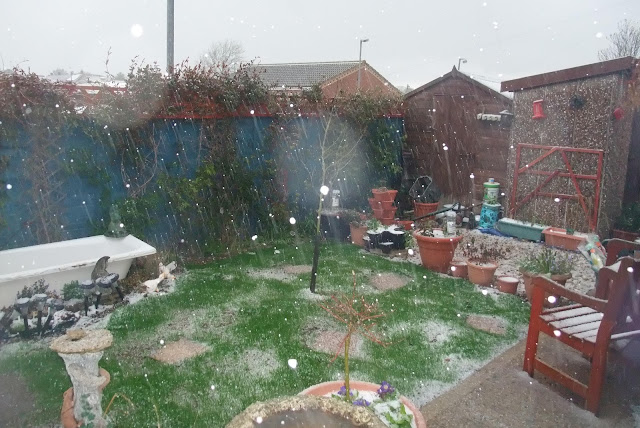 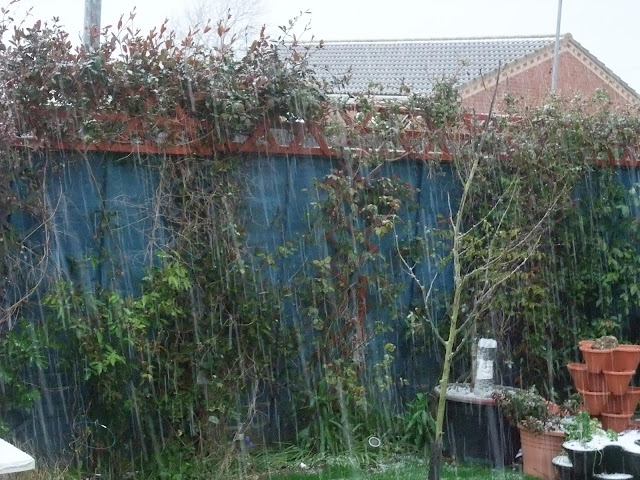 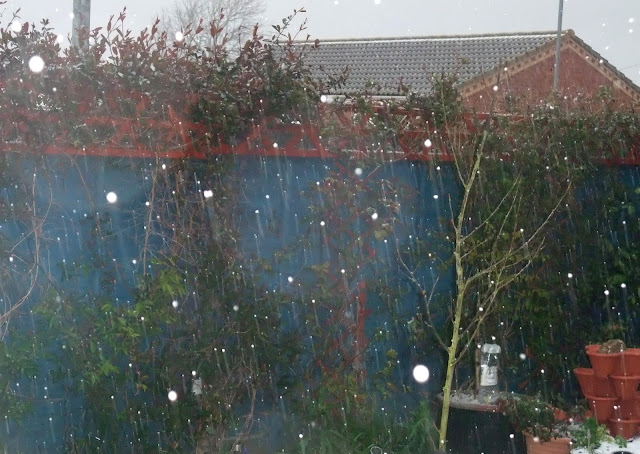 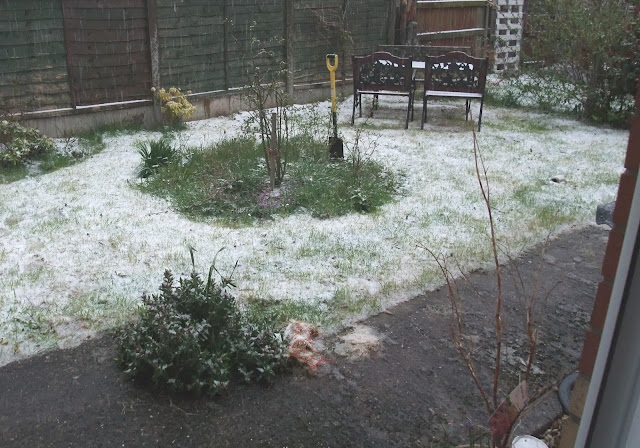 We had no snow over the entire winter, then we get this - and it's almost May!
Posted by G1VVP / Skegness DX, with John Faulkner at 19:11 No comments:

Catching up with a few loggings.

I came across this one with the flag pointing south while I was looking for Botswana. It signs off around 2300 and carries NPR News from America on the hour, otherwise it's a trip down Disco Memory Lane! Not 100% sure but I think this is a pirate station.

I AM Radio dominates the frequency in the evenings, but no LPAM stations can be heard in this direction once it's closed down.

This has been the earliest start to a sporadic E season I can remember, although I haven't really checked so early in April before now.

The first Es opening of 2016 came shortly before midday on April 18th with a small opening to Russia on the OIRT band. Nothing was heard on band 2.

The second Es opening reached band 2 just after midday on April 19th. Arabic programming was heard for a minute or two, very weakly on 87.6. It was definitely sporadic E.

The third opening came today, April 24th, during the early evening, when the Reggio Calabira area in southern Italy came through, the MUF reaching 90.4 MHz.

A sign of things to come? Of course not ;O) The Es will happen as and when they want. This probably means nothing at all, but how nice to have such an early start to the season.

Good DX!
Posted by G1VVP / Skegness DX, with John Faulkner at 23:40 No comments:

I was just updating my web pages, adding the last few entries from my 2015 to my personal all-time E logbook, then it struck me - my 2015 season was finally over ... AT LAST!

2015 was the first Es season where I had used a band 2 SDR. It was something of an experimental process, resulting in me acquiring a large number of SDR files, all produced by my Elad FDM-S2 SDR receiver. It was all very exciting, knowing that I could record large chunks of the FM band, the whole band in only four chunks in fact! Very nearly three chunks, thanks to the 6MHz bandwidth!

DXing in this manner means that I am less likely to miss stations which are coming through. No more single channel DXing, it's now SIXTY CHANNEL DXING !!!

What did this mean?

* Lots of files to check through (well over 500 or 600 in my case - I didn't count them).
* Each file could take half an hour or longer if I wanted to investigate reception closely.
* There was never enough time to check the files ...
* Therefore I got well behind on log reporting - over seven months behind at times!

But there was a very big positive:

* Almost 9000 loggings!
* More double hop spotted than you can shake a big stick at!

The quantity of loggings never outweighs the quality of loggings, but I was very pleased to report double hop reception to Israel, Cyprus, Libya, Lebanon and Turkey - that's Istanbul AND Asiatic Turkey, right down to Adana, not that far from the Syrian border. Turkey was received on several occasions. One day I had GOOD signals right to the top of the band! It was like living in Istanbul.

The important question is, would I have had this double hop reception had I only had single frequency DXing? I estimate that between 60% - 90% if it would have been missed. I may have still had Cyprus and Turkey, but in limited quantity. It's possible I may have missed all of it. The Istanbul reception was only possible due to the recording facility. I was not at home at the time!

The whole thing was an experiment to find out what was possible with broadband FM DXing, finding out the pros and cons, but I had to check through EVERY single file. That now having been accomplished, I can say that I definitely WON'T be so eager in the future. It's just too much! In future I will record far less files. Yes, there are obvious benefits of recording large quantities of files, but it comes with diminishing returns. More files = more repetition of the same stations. Useful, perhaps, but probably not worth the extra effort, unless you are extremely keen or have a lot of spare time on your hands.

In 2016, I plan to record far fewer files and I will target certain countries. Checking hundreds of SDR files held my attention and remained interesting only for so long. I was determined to achieve my goal, and I am pleased to say that I did, but NEVER AGAIN! Ocverall, it was interesting and mostly fun, but there are limits.

Happy DXing!
Posted by G1VVP / Skegness DX, with John Faulkner at 13:49 No comments:

Poor conditions overnight. It was a struggle to ehar these.

First Es of the season!

Poor conditions, but audio popped up on a few interesting frequencies. 690 and 1240 had the strongest Latins, but they were splattered into next week might be worth checking back in a few days then ;) 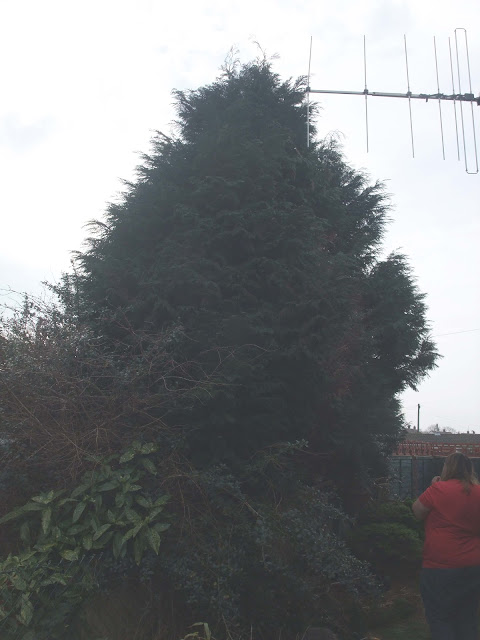 The conifer has to go, but not yet.  :O(
This time I intended to cut down two of the main branches, close to the base of the conifer. Well, that was the plan, but I had to down tools when I heard lots of tweeting. No, nothing to do with the social media site, but a nest of birds, deep within the tree. Mother was at the top of the tree, waiting for me to disappear so she could feed them. 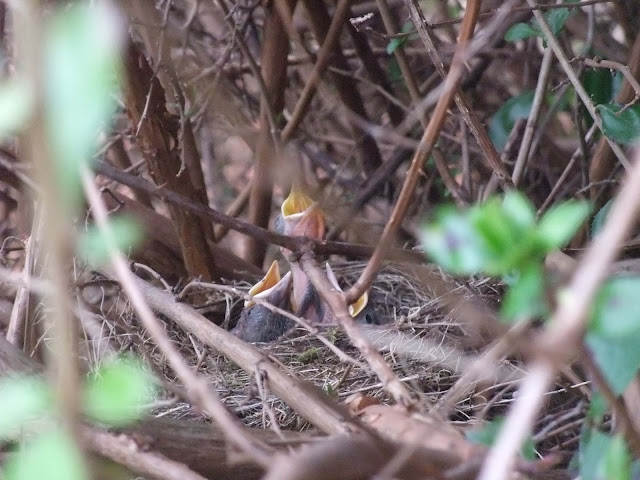 In the meantime, I daren't move my 9.2 further clockwise than 180 degrees. Hopefully, the birds will have flown their nest soon. :O)
Posted by G1VVP / Skegness DX, with John Faulkner at 17:13 No comments:

I occasionally hear oldies on 980 when conditions are good to North America. This morning had this mystery station coming in well around 0430, but the peak coincided with the middle of a song. I suspect this is CHRF Montreal but I can never find an ID.

Plenty of other frequencies were alive with North American signals just before local sunrise. Sadly, many of them faded perfectly for the top of the hour, as is all too frequently the case.