The second day of the tropo and conditions are becoming quite widespread, jumping quickly from one area to another. Sometimes the conditions will die away quite suddenly, only to return a few minutes later. I wonder if this has something to do with the variable amounts of mist and fog we have experienced today.

More Beverage tests. This time from a run along a line of trees just to the south of town. I haven't created a separate FM List logbook for this as the land falls within my home grid locator anyway - JO03dd. The location is 2 km from home. Once again, I recorded medium wave simultaneously at home on my FDM-S2 and, once again, there was no comparison. 1130 WBBR and 1520 WWKB were the highlights.

Comparing a Short Beverage Antenna to a Flag Antenna at Home

An audio comparison demonstrating reception differences between a short Beverage antenna out in the wilds and a standard flag antenna used at home. Click here to hear the recording. 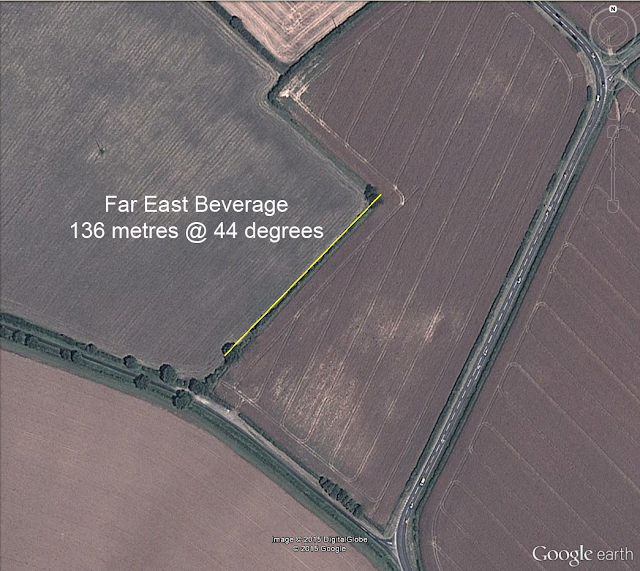 Taking advantage of a useful line of trees

It's the first time I have tried a simultaneous DXing exercise, listening both at home and on a Beverage antenna, six miles from home. I knew there would be differences, but even this short Beverage have some surprising results.

Correction: I incorrectly state that the Beverage antenna was 180 metres in length. It was actually 136 metres.
Posted by G1VVP / Skegness DX, with John Faulkner at 18:15 No comments:

First mini-DXpedition log from Candlesby Hill, near Skegness, Lincolnshire. This will probably be the last trip there too as the location is slighty too exposed for my personal liking, but it povides two very useful hedgerows.

This log is the result of a mobile DX trip, thie files from which I had forgotten.

The band was full of transatlantic signals, with more than one transatlantic station being on many frequencies. This log represents the more interesting catches and regularly heard stations are omitted.

This was another frustrating DX session as most top of the hour recordings didn't happen because of problems with the laptop I was using at the time. Pressing the record button on the Perseus usually resulted in the laptop freezing and in need of a reboot. Still, there are some new stations in the log which I have not received in Skegness before.

I've been wanting to write about a visual phenomenon I often see on the FM List Visual Logbooks during Es openings. The problem I have in demonstrating this is that you really need to see this particular display live, as it happens, as the Visual Logbook will quickly fill up with additional propagation paths and the general effect becomes fuzzy and lost as the propagation path moves.

Now, I expect this phenomenon is already widely understood in amateur radio circles. It's just that I have never come across it before and, even after asking a few ham operators, not one of them said they were aware of this effect.

What is it? Well, I can only describe it as a symmetrical propagational pattern, maybe there's even a circular pattern in this too, as you will hopefully see. The best way I can demonstrate this pattern is to show you graphics of the early stages of a few Es openings from this summer. Let's start with a fairly obvious one - yesterday's Es opening: 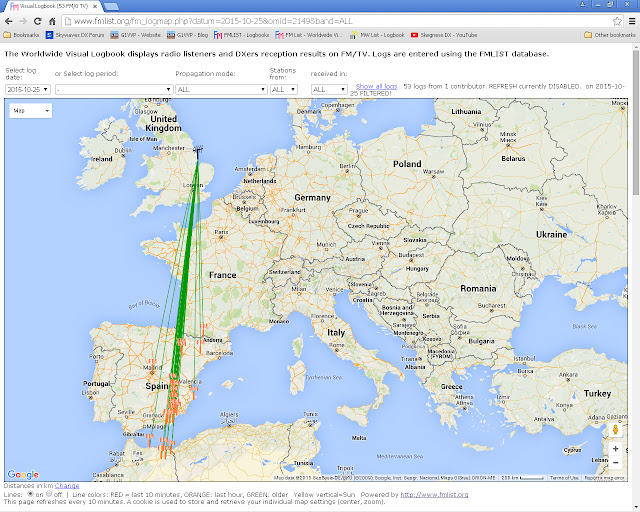 Note the central region in this propagation 'spread' which covers a circular-ish effect in southern Spain. There is a main band of propagation. Note also the two outer flanks. It's probably not so easy to see the circle, but you should see a kind of elliptical effect. Bear with me on this as it's not so clear once the propagation path has moved around, as it did today, but you can see this effect better with just a few minutes of Es, and also thanks to having a broadband SDR receiver which lets you see this pattern more readily. 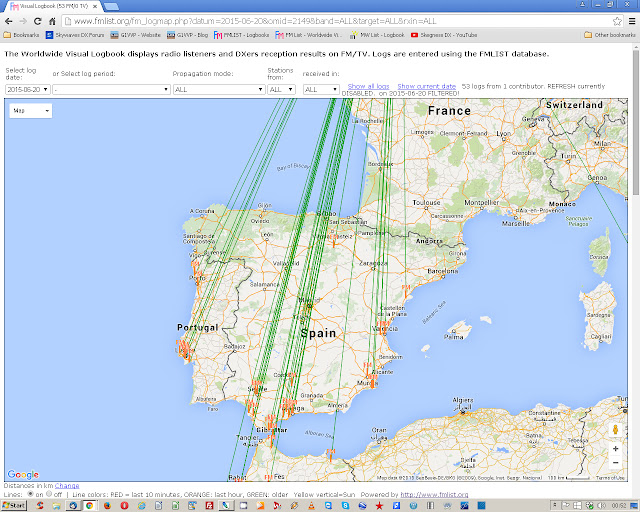 Another example of symmetry. Even a circle again. 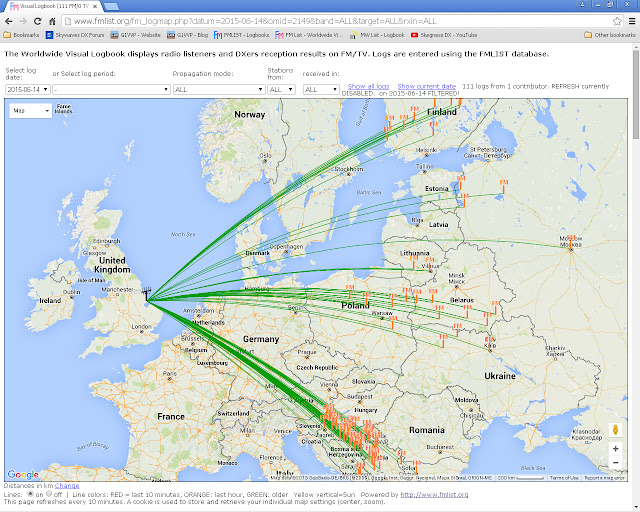 And hopefully still as obvious, this more prolonged opening: 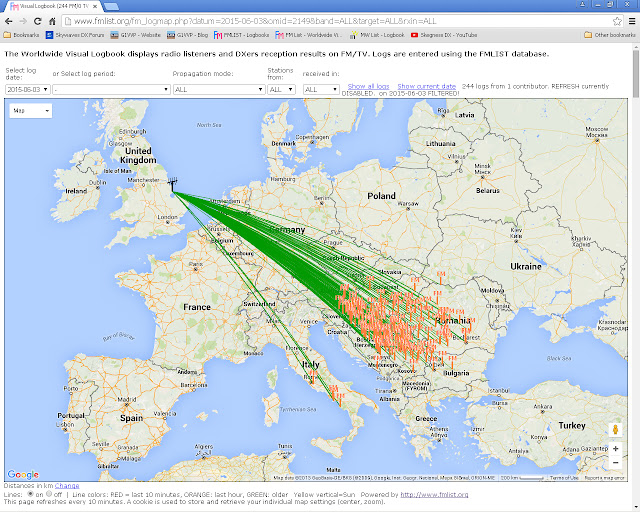 This time the opening was fairly stable and you can see two broad paths of reception, with two flanks at either side.Again, roughly symmetrical


There are many better examples of this, but the clarity is lost as the opening continues and the symmetry is buried under an ever-increasing mass of lines. As I say, you really need to take a snapshot over just a few minutes - five or less, then the effect is much, much clearer. I cannot separate the time slots on the daily FM List logbooks, hence using these four images which offer the best examples I could find, but I do see this very pattern with virtually all Es openings.

What does it tell us though? It certainly doesn't say that the areas between the lines, where nothing was received, don't have any radio stations. That's clearly not the case at all.

Perhaps it's possible to get a good idea of the shape of an Es cloud from this.

Hopefully this is of interest - and it's probably something which is already understood, or is SDR technology now showing us something we haven't previously been able to see?
Posted by G1VVP / Skegness DX, with John Faulkner at 02:06 No comments:

An unexpected Es opening to Spain and Morocco! I understand this is the third Es opening this week. I was by the receiver during one of the other openings and I did not receive anything. The other I was out. Unusual to have so many Es openings so far away from the main season.

East Asia gently returns to medium wave this afternoon. But of all these, only VOA Thailand has been heard consistently over the last few days. Listen for the Yankee Doodle theme behind Radio Farda. 1700 is currently the most favourable time.

I am so glad I made several top of the hour recordings overnight. Had I not done this I would not have logged two new Bavarian sites: Gelbelsee and Bamberg.

Plzen was still instantly RDSing at 0300 and 0400. Austria also peaked nicely at 0400. There were still plenty of few strong signals around, but my biggest surprise was the reception of France Culture, Marseille, on 99.0! I was so sure I heard this yesterday but for some reason I couldn't log it. I thought it was my imagination or some tropo-like meteor burst. The signal returned three times this morning and for about 30 seconds each time. Clearly not meteor scatter at all. The tropo maps did not suggest this path would be available to me, but then this was the super-tropo which nobody forecast! Even more surprising was the return of France Bleu Perigord from Bergerac, also on 99.0, which came back to dominate 99.0 shortly afterwards.

May we have another tropo like this very soon!

Another excellent and mind-boggling tropo and I think the most widespread tropo I have ever known. The propagation path spread from northern Spain, right through to northern Germany, with these and all areas between coming through simultaneously! Complete madness!

I was expecting Poland to make an appearance when conditions spread into northern parts of the Czech Republic, but it didn't materialise.

The Swiss tropo was the strongest I have known but, unlike the last time I had good levels from Switzerland (September 23rd 2013), going vertical did not bring in any low power transmitters. All signals peaked mid-evening, bringing Bavarian transmitters up to 61dB. The Czech Republic reached a whopping 54dB too. Again, bear in mind that I am using a 20dB pre-amp so subtract 20dB from these figures for reality.

And this was the tropo which wasn't forecast! Luckily there were countless alerts flying around the Skywaves groups. How did they get it so wrong? Switzerland and the Czech Republic were received from as far as north-western England!