This opening came out of nowhere! The 6m maps did not give much in the way of hints that this one was coming!

This was the best day of E Skip for me so far this season. It's more quantity than quality though, as some might say, largely due to the video technique I have adopted, but there was one bit of quality at 1028 when I received Madeira Island for the first time.

Videos of the highlights of today's opening can be found at my YouTube and Vimeo pages, listed in the footer.

An hour into this never-quite-got-started opening something more interesting happened. 88.0 had Es with a male speaker in a language I can only describe as sounding like a cross between Greek, Dutch, German and Italian. After a few seconds of speech they played an old Sex Pistols song. It faded as quickly as it appeared. I wasn't recording at the time as I initially assumed this was Holland. The signal lasted only fifteen seconds or so. No other Es were coming in at the time.

A few minutes later I had a station on 90.2 playing what vaguely sounded like Indian music, with a flute as the lead instrument. I managed to record the tail end of this. It too was fleeting and weak, but at least I was now recording. Then nothing for a few more minutes.

Suddenly 89.4 sprung to life with a male speaker in a language I couldn't place at all. It sounded nothing like any European language I had heard. Good job I had been streaming this via TeamViewer or nobody else would have heard it because I hadn't realised that I had the pause button active in Bandicam, so this one got away too and none of the above quite reached RDS level.

The reception might be nothing spectacular, but I am still inclined to think it may have been double hop as the 6m map was covered in it with lots of paths running from the middle east into the southern half of England. There was more double hop than single hop being reported at that time.

This opening began as just another one of those teasing openings, so typical of this year's Es season, but it developed into something quite reasonable amd there were some good signals at times. I love these openings into the north-west corner of Spain!

2014 Sporadic E season Officially the Worst On Record: The Facts ...

Amazing but true!  Click on the link to read the full article. 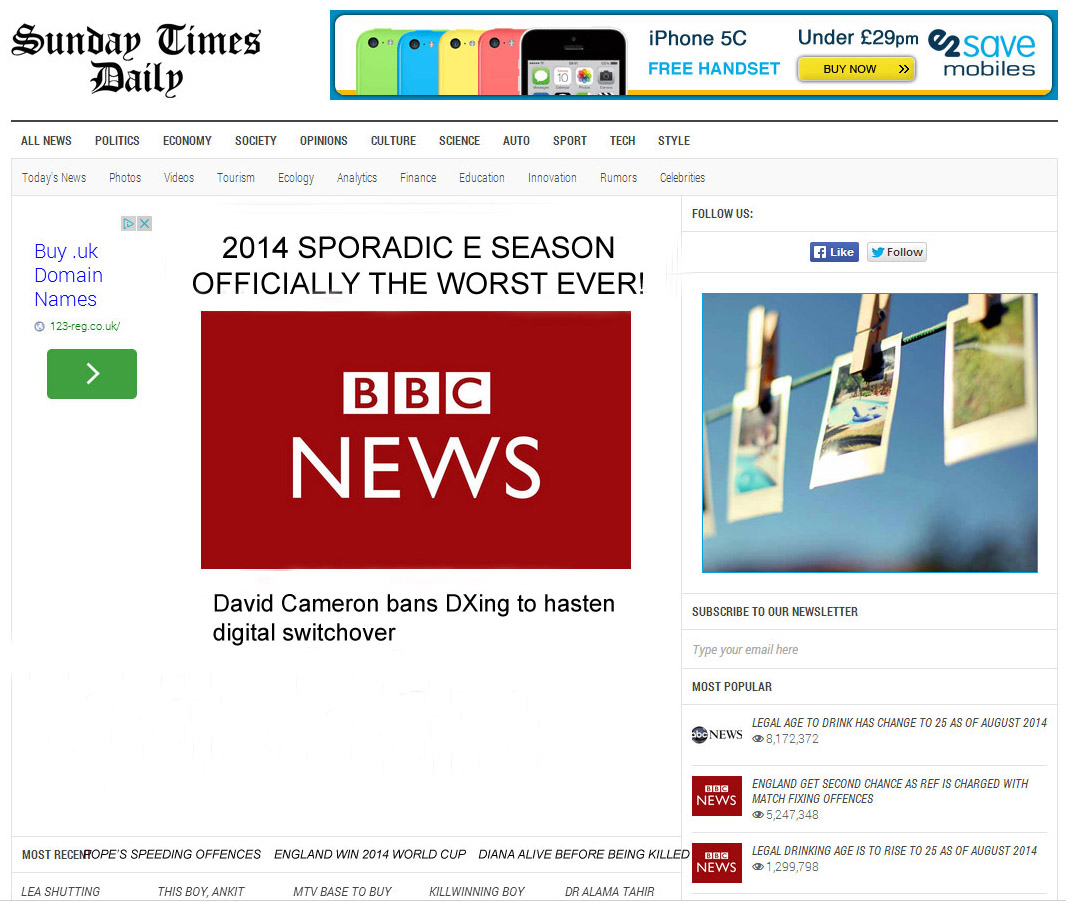 Posted by G1VVP / Skegness DX, with John Faulkner at 19:48 No comments:

Email ThisBlogThis!Share to TwitterShare to FacebookShare to Pinterest
Labels: Humour

Unidentified:
Belgium on 106.3. Possibly too weak to be of use but some .be web addresses in here which might give clues. https://app.box.com/s/q700vzwocb7ousrymweh

I am getting behind with logs now. So many distractions, but I found some use in video recording the Es opening on the 21st. This had some benefits, It seemed to help build up a better picture of the opening as I am able to take more time this way. It is also possible to catch a lot more of the opening as there doesn't need to be any time set aside for manual logging. The downside is that you have to go through the opening twice and the second time seems much slower.

The Dutch tropo continues with some good strengths and RDS on many of the main transmitters.

Here We Go Again ... More Aerial Complaints & Another Visit From The Housing Inspector!

You wouldn't really expect it, would you? After the problems we had with our last neighbours and our aerials, you might think we would to be very unlucky if we had the same problems from our new neighbours. What are the chances?

Today we had a visit from the chief planning officer of our new housing association. He had traveled from Birmingham no less! The purpose of his visit was twofold: To sign off the aerial installation and two fences I have built; To investigate TWO further complaints the housing association have received about my FM antenna.

One of the complaints was about the noise levels generated from the Yaesu G-5500 rotator. He asked me to rotate my aerial while he stood outside, underneath the antenna, and listened to see how noisy it was. I must admit, the G-5500 does generate more than most rotators I have used, so I expected this might be an issue. After using the rotator, he asked me to sin the aerial again. I couldn't hear the comments he was making to my wife while I was inside the bungalow, but he seemed to find something amusing. Later, I soon realised that he had been laughing in disbelief that the neighbour could have made a complaint about something he could barely hear while stood right next to it! He also added that the wind chimes in his garden produce far more noise than my rotator. He was quite satisfied that the rotator was well below anything which could be considered a just cause for a complaint and, just as on his previous visit, joked that some neighbours complain about nothing and that this was such an example. He assured us not to worry about using it AT ANY TIME.

I then directed him to the cabling, drill holes in the wall, connection box and TK brackets, etc., so he could see the tidiness and professionalism of the installation. The housing association require that aerials can only be installed by a CAI registered aerial contractor and that we must also provide proof of insurance. He was completely satisfied with all that too.

IN a way, the inspector couldn't have visited us at a worse time as I had been constructing a band 1 dipole for the garden so I could monitor transatlantic TV frequencies. It was just draped awkwardly across the wooden arch, looking a bit untidy and random. No - he was not concerned about that either.

All in all, he signed everything off and was satisfied everything was in order and he commented the installation was "better than expected". We passed with glowing colours! He was particularly impressed by the fact that we had made provisions for lowering the antenna in the event of strong winds. He also stated that it wouldn't have been a problem had the aerial been twice the height above the ground!

So I can't convey enough how relieved we both are and, at last, we can put this ridiculous aerial saga to bed. Common sense prevails once again.

05-09-14 Update:
Today, we met the final neighbour. The only one we hadn't really had a good natter to. We soon discovered she was quite happy with my aerial installation and even found it all quite interesting. She was very convincing too. We had no reason to disbelieve her and could only assume one thing. Something we had suspected for a while. That our new neighbours hadn't made any complaints at all. So who did? You're probably ahead of me on this already! Could it have been our old neighbour? We since learnt that the complaints were not even signed and could have come from anybody. Hmm.

The aerial is clearly visible from the main road a hundred or so metres away. It is quite likely our old neighbour would have spotted it. Skegness is a very small town and our new home isn't that far from our old address. Considering the incessant nature of our old neighbour's complaints and the problems he caused we would not be in the least surprised if was continuing his campaign against us even now. That's the kind of person he is. What his problem is I have no idea. We never did anything to him other than help him. We used to get on well, socially. What changed we have no idea, but it looks like the problems still exist despite the fact he is not our neighbour anymore.
Posted by G1VVP / Skegness DX, with John Faulkner at 00:52 No comments:

No post-tropo flatness this morning. Instead, some good scatter!

The only other point I could add is that we have received two more complaints about my FM antenna, bringing the total to three! At this rate we are going to end up with more complaints than we did from our previous neighbours! I won't go into detail here, but I have written a full account here if anybody wants to know more.

Posted by G1VVP / Skegness DX, with John Faulkner at 23:52 No comments: 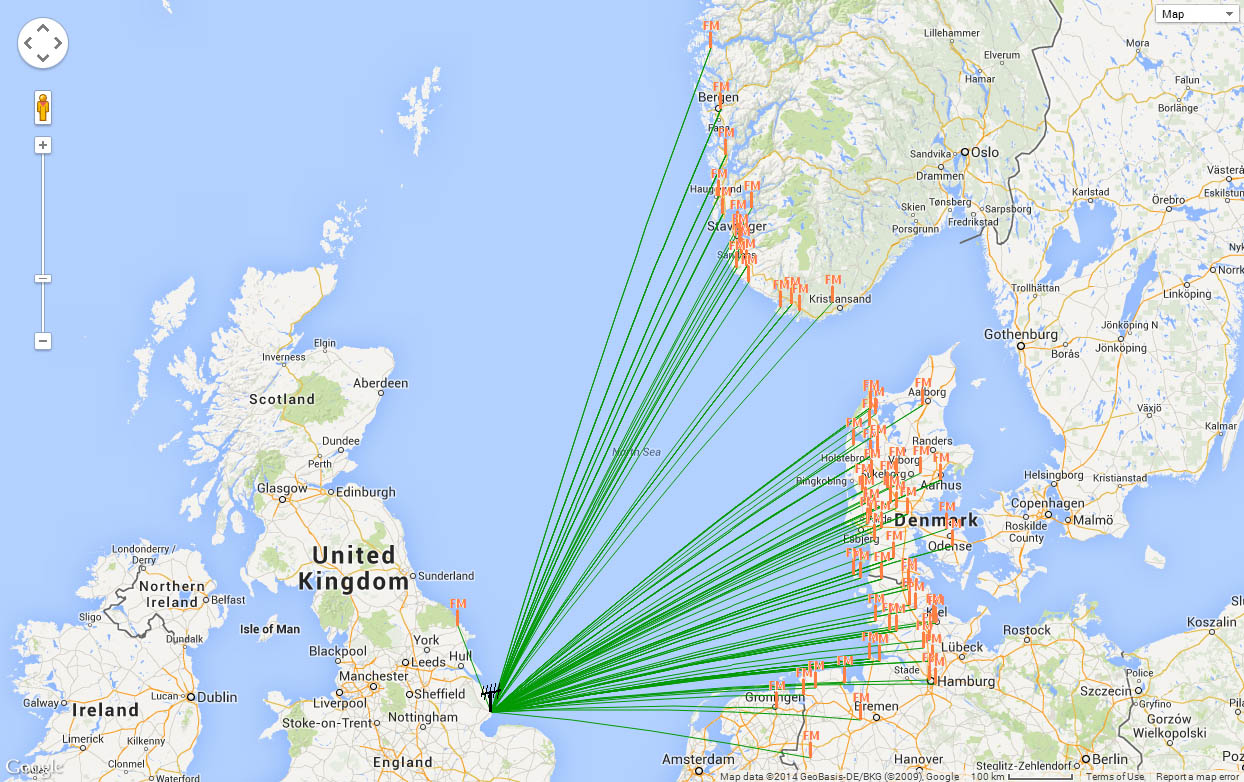 What a day! Today saw my personal best tropo to Norway with about a dozen "naerradio" (local) stations coming across the sea. Denmark also put on a good show with many locals. There were many personal firsts from this event.

On the sporadic E side, can you believe that there have been FIVE openings today? They were all very fleeting and very weak with only two openings producing enough signal to reveal the RDS. What a tEase!

At the time of compiling this log (23:00) the tropo has disappeared. An early night for me!

A bit of everything today! Es, general scatter, meteor scatter and tropo!