A Flag Antenna For Medium Wave

As DXers, we are constantly trying to improve our DXing setup: Increasing antenna height; Adding gadgets; Buying new receivers; Trying to cut down on noise, etc. Each improvement, no matter how small, is a step in the right direction. As a certain supermarket says, "Every little helps". If you are lucky, you might change something which makes a BIG difference. For me, changing from the cardioid loop to a flag antenna was one of those BIG improvements.

With the exception of changing from an analogue receiver, my AOR AR7030 in this case, to an SDR, the switch from a loop to a flag antenna easily made the second biggest improvement I have ever made to my medium wave DXing, its performance being far better than I had expected. Other articles I have read concerning the flag antenna only back this up. Compare the flag with other antennas and you'll immediately see why it is the preferred choice of many DXers, especially on the medium wave band.

Longwire Antenna:
Take the longwire antenna for starters, it's a random length of wire, strung out between two points. It's a general receiving antenna in every sense of the word. It works well enough, but it's omnidirectional and so picks up everything from all directions. The longwire is a great starter antenna.

Loop Antenna:
The loop antenna has three useful features. 1. It is inductively linked to your receiver, which means there is isolation between the antenna and the sources of QRM in the shack. 2. The loop antenna is bi-directional, having a 'figure of eight' pattern. 3. Some loop antennas are tuned with a variable capacitor which can offer a high amount of 'Q' and so can potentially reduce receiver overloading if you have multiple strong local signals.

Cardioid Loop Antenna:
This is an amalgamation of the loop antenna and longwire. It is possible to adjust the amplitude and phase of the antennas via a simple control box which chops off one of the lobes, resulting in the loop becoming a unidirectional antenna. I used to use such an array in my early days of medium wave DXing. It was possible to point one side of the loop in the direction of North America, a favourite target of mine, while reducing co-channel and adjacent channel interference from European stations coming in off the 'back' of the loop. This was reasonably easy since North America and most of Europe are received on opposite sides of the loop here in the UK. The deep nulls produced with the phasing controls would remove most problem European stations.

There was just one small drawback with the loop and longwire phasing system: The loop antenna is a high-angle receiving antenna, which meant that I could usually hear only east coast North American signals and nothing from the west coast - a target area of many medium wave DXers in the UK. This always seemed to be the case, even when conditions were good.

Beverage Antenna.
Named after its inventor, Doctor Harold Beverage from Maine, USA, the beverage is simply an untuned longwire. It is often used by medium wave DXers and is probably one of the simplest antennas to make. You need a lot of room though as they need to be at least half a wavelength long, so for medium wave, that would translate to 100 - 200 metres, though it is quite a forgiving, broadband antenna and they usually work well outside the designated frequencies. A full wavelength Beverage for medium wave would be 300 metres in length so it matches the centre of the band. The Beverage has a unidirectional pattern, but medium wave DXers will know that its strength comes from being a low-angle receiving antenna, so it is better at receiving signals from greater distances.

Flag Antenna:
Enter the genius of the flag antenna! Somehow, this simple construction manages to capture the more desirable qualities of all the other antennas put together ... qualities the medium wave DXer needs. 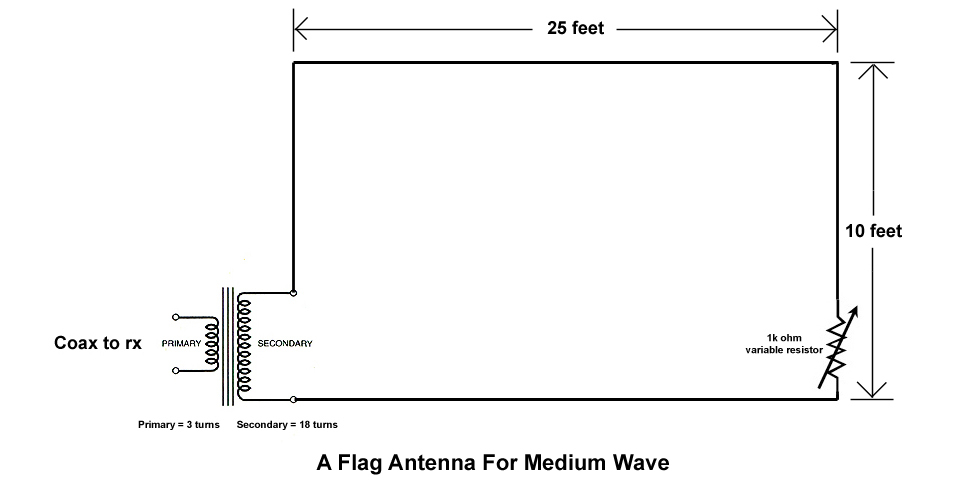 Call this a ewe antenna if you like. The main difference is the bottom of the vertical legs are joined together, as opposed to be being grounded as with the ewe. This antenna is fed at the bottom of one of the legs, though some designs are fed in the centre. There are various designs with slightly different characteristics, so there may be minor discrepancies here and there as to exactly what a flag (or ewe) antenna is. The design above still makes a superb DX antenna for the medium and long wave bands combined.

Benefits of the flag antenna:

* A decent amount of pick-up for such a compact antenna.
* A broad beamwidth, useful for receiving all the Americas from my QTH, for instance.
* A broad and deep null width.
* A low angle receiver, similar to the Beverage antenna.
* Physical isolation via the transformer, thus potentially reducing noise pickup.
* Broadband reception from long wave through to the tropical bands.
* Adjustable nulls, but without urgent need to retune for different parts of the band.

While the latter point is generally true, fine adjustments can be made which may offer some improvement, though for the most part you will find that once you tune in a null on the flag to the centre of medium wave, it will be experienced across the rest of the band, to a greater or lesser, but still highly usable degree. This is the case for me at least and I do not see any obvious improvement when I re-tune the null to a specific part of the band.

Note:
If you double the size of the flag, you will receive more signal level, but the null may be less effective and certainly not as deep. This effect has been noticed by several DXers. It may just be a case of individual quirks, but my own experience has found significantly poorer performance when the flag has been increased in size beyond the dimensions specified in the image above.

The flag antenna is basically the same as the ewe antenna regarding construction, apart from the lower wire which connects the bottom of both verticals, as opposed to grounding them. The letters "ewe" do not mean "east west east", but you can understand how this common misconception came to be when you consider the needs of the UK medium wave DXers. It actually refers to the shape of the antenna - i.e. an inverted "U" antenna.

Those who have tried both the ewe and the flag, as have I, will probably find the flag antenna offers deeper nulls. It is my personal favourite of the two, but both antennas are more than capable of providing good DX.