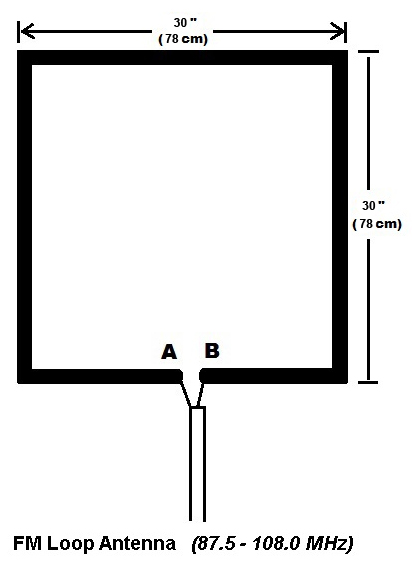 Yes, that's how it has come to be known. I didn't design it. I didn't invent it. But I did create this scribble of a diagram in Micro$oft Paint. Yes. Try not to laugh too hard. The story behind this antenna goes back to the 50s or 60s when a DXer called Frank Smales published an article in the Medium Wave News called "A Loop Antenna for FM?" It is based on the design of a cubical quad. But the beauty of this simple folded loop is that it has a reasonable amount of gain over a half wave dipole. I have seen quotes of up to 5.5dB, but we can probably expect it to be somewhat less than that. Let's very roughly compare it to a three element Yagi in terms of gain.

What I do not want to do in this article is delve into anything technical. This is a simple antenna which is easy to throw together using "Bodgitt & Scarper" techniques and ... it actually works very well!

It's not a big antenna. It's less than a metre square. It works well indoors and out and, because this design is not easily de-tuned by being close to nearby objects, it even works quite well when I've had it leaning against a wall on the living room floor.

I have been singing the praises of this design for years and I often recommend this little antenna to newcomers to the hobby since they are so simple (Not the newcomers!) to put together and cost next to nothing. This is the reason it has come to be known as the Faulkner Loop Antenna. Oh well, it's a small claim to fame. It's amazing what you can do with an old piece of coax. That's right! It's a piece of coax. The design in the original MWN article recommended the use of a length of coax to form the loop itself. Make sure you twist the inner core and outer braiding together though.

To resonate in the centre of our FM band (98 MHz) the loop needs to be about 30 inches square, that's 78cm in European. Add or subtract six inches to resonate at either end of the band if you want to experiment, but this is fairly forgiving antenna and should cover the entire band very well.

Note the connection points A and B in the centre of the bottom part of the loop. If you have the coax fed at this particular point then you have a horizontal loop. rotate the loop 90 degrees so the feed is on one side and you have a vertical loop. If you connect in one of the lower corners then you have a loop of mixed polarisation, but since I haven't tried such a configuration I am unable to comment on how useful the performance is when this way. A 'slant' dipole doe not seem to be a good idea as you have a degree of 'loss' from both planes, so concentrate on horizontal or vertical. I do not know if the same is true of this loop antennas.

The reason I built a loop antenna back in the 90s was because I had just moved into a property and did not have an outdoor antenna at the time. The loop really surprised me as I discovered that it had sufficient gain in order to resolve full RDS from meteor scattered signals. The loop was only resting on the bedroom floor and leaning against the wall at the time! With this level of performance I have always wondered why there aren't more of us using these simple antennas.

I soon began using an FM loop when DXing mobile in the Derbyshire hills. The resulting logs were impressive, even when conditions were about as flat as the loop itself! The loop would be resting on a tree branch about eight feet above the ground.

This loop receives 'front and back' with its figure of eight pattern and the the side nulls are very deep. You can also make this loop more directional by adding "reflector" and "director" loops of an appropriate size. But as with all antennas, the best results will be achieved if it is mounted outdoors and clear of nearby objects.

The next paragraphs are taken from my original article so please excuse any repetition:

The construction bit
This antenna uses Bodgitt & Scarper technology.  It is so simple even I knocked one up in a matter of minutes.  You don't need to rely on my design, however, you may wish to make the construction a lot more sturdy, but the purpose of this article is to show how you can achieve good results with the simplest of constructional effort.  If you are going to use the loop externally for an extended length of time then it would benefit by being made more sturdy and suitably waterproofed.

I constructed the loop quickly to use in mobile situations where I just throw the loop up into a tree or hang it on a branch. I will get round to constructing something more solid one day - perhaps!  This is what I used ...

*  Square wooden doweling around 2 cm thick (around half an inch). Enough for four x
78 cm lengths = 312 cm total (or 4 x 30 inch lengths = 120 inches total).
half an inch square).
*  At least 15 metres (50 feet) of good quality 75 ohm coax cable
*  Screw terminal blocks
*  Sticky tape - duct / gaffer variety Alternatively, you could construct the loop out of plumbers
copper pipe instead of coax and some 90 degree corner joints.  Make sure you insulate the copper
though with thick tape though if you intend to hang the loop on tree branches.  Any physical
contact *may* degrade performance.

The receiving element itself is a 30 inch (78 cm) square loop of the coax, so you will need to construct a suitably sized wooden frame, say 10 mm (half an inch) less each side of the wooden doweling around which you will wrap the coax - this is just to make allowances for the coax which will then be the correct size. You could of course fix the coax to the face of the wooden frame.

The coax needs to have a feed point half way along the bottom of the frame so cut coax to a 10 feet, 2 and a half inches (312 cm) in length and wrap this around the frame ensuring the inner core and outer (braid) are connected together, each end going into separate connections on a small electrical screw terminal block.  The remainder of the coax will be used for the downlead - you can vary the length accordingly.  Connect the two ends of the loop to either side of the coax downlead via the terminal block, either way around, it doesn't matter.

The impedance of the FM Loop is 75 ohms.  There has been much debate about this but this fact has been stated in older ARRL and RSGB publications. I cannot comment. Also, recent computer modelling has given the impedance as 75 ohms at resonance too.

The loop should be positioned broadside to the transmitter for best pick-up, while the nulls can be found endways on.  The loop also seems to have other quirky attributes, exhibiting a slightly unidirectional pattern at times. The coax download is probably playing a part.

So, in conclusion, this is antenna is 'very' easy to construct. It is very efficient and seriously outperforms my vertical FM whip with several extra dB of signal. As I have said, this loop has a big advantage in that it works well indoors and doesn't seem to mind too much where it is located. This and the constructional aspects make it an ideal antenna for beginners. No, it 'doesn't' look like much of a DX antenna, but I have been very surprised by the reception I have had and it has become an essential part of my mobile DX setup.

Used indoors at home I have been able to eliminate local Lincs FM on 102.2 and leave the frequency free for Galaxy from Birmingham at noise-free listenable strength - something none of my other yagis or rooftop beams have ever been able to achieve.

Finally, for further reading, you can find out more about these antennas at http://pa0fri.home.xs4all.nl/Ant/Quad/quadeng.htm